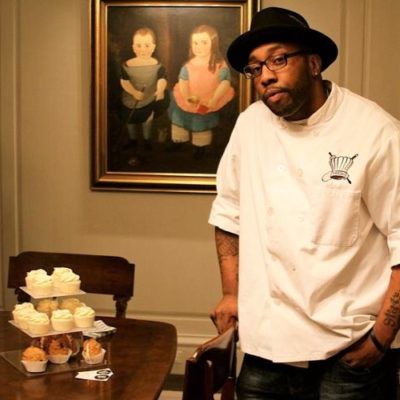 Antwoin Gutierrez always knew he had it in him to be successful. He was smart, resourceful, and had an innate understanding of business. But growing up, he made some wrong turns, and the potential he had was channeled into dealing drugs and street violence.

“I was gangbanging, but I was also an honors student,” he says, reflecting. “I learned how to cook cocaine at 16 or 17, and realized I liked the chemistry behind it. And I discovered economics through hustling… Apparently, they call that a ‘misguided entrepreneurial spirit’.”

He remained misguided for a long time; he got involved in shootings, kept dealing drugs, got suspended from school and later dropped out… And eventually, he ended up in prison. After a few short bids that totaled to about 4 years of incarceration, he knew that something had to change. And once he became a father, his determination solidified. He decided he would come to Ready, Willing & Able.

After the street cleaning phase of the program, Antwoin came to the kitchens. “I was still causing a bit of trouble here and there. So Gino, the Director of Food Services, started watching me more closely,” he says. “He helped me focus on the food, and showed me all different kinds of recipes, techniques, the process… And pretty soon, I got to liking it there. They saw my skills, and they put me on the Culinary Arts track.”

With his newfound purpose, Antwoin started to excel, even earning the nickname “Chef Fresh” in the kitchens. He learned more recipes, how to cook for a high volume of people in the facilities, and a coworker, Pete, groomed him so that he could bake independently. “Once I got that positive feedback from people in the facilities… Well, that’s what kept me coming back. It’s really rewarding to hear that people like what you’ve made for them.”

After moving on from Ready, Willing & Able, Antwoin held a few jobs around the city in restaurants, bakeries, and cafes. But his new dream was to start his own business. He was ready to take that entrepreneurial spirit and put it towards something good. So, he started taking side gigs whenever he could, building his network and his clientele. Eventually, he started Fresh Taste Bakery —his very own bakery—under his earned name, Chef Fresh.

At Fresh Taste Bakery, Antwoin bakes for every occasion, making gluten free and vegan cupcakes, liquor-infused treats, and his own concoctions like carrot cake cookies. He says it’s not easy to run his own business, but he loves a good challenge and can’t wait to see where Fresh Taste Bakery leads him. “My new dream is to open a storefront on Lexington Avenue that will compete with the biggest bakeries in the industry,” he says.

Antwoin recently sat on a public panel to discuss how to best utilize the “undiscovered talent pool” (people with criminal backgrounds). He also enjoys sharing his story with anyone he thinks he might be able to help, speaking at prisons, schools, homeless shelters, churches, and more.

To all the Ready, Willing & Able trainees to come, Antwoin shares this advice: “You may be the star, but you need a supporting cast. Be respectful, remember that you are who you associate with, and focus on your craft so that you keep busy and stay out of trouble.”

To support Antwoin’s business, check out the selection at Fresh Taste here!