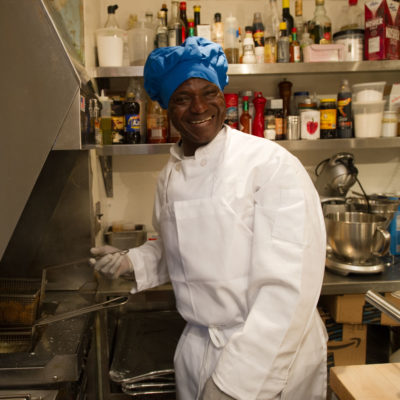 Step into the pristine, bustling kitchen at The Harlem Center for Opportunity where 200 men in blue live, and you’ll find Danny Djoro hard at work. When he’s not overseeing the prep for hundreds of wholesome meals each day, he’s teaching trainees how to reach their dreams–in and out of the kitchen. Teacher, mentor, and all star chef, Danny has spent ten years on The Doe Fund’s culinary arts team.

“After I was released from prison, the judge told me I had six months to straighten my life out or I was going to lose my son,” said Danny. “That was my turning point. I joined The Doe Fund a week later.”

Danny transformed his life in our kitchens, first as a trainee and now as an employee and instructor. “I love cooking, but I get so much more from instilling a passion for cooking in others.”

For Danny, a career in the Culinary Arts wasn’t just about making money, it was about learning patience, humility, and becoming a better father to his wonderful son. “I used to think that being a good parent meant spending money on my son.” But it was the quality time between parent and child that changed both their lives. “Now we spend time together– and we love to cook together.”